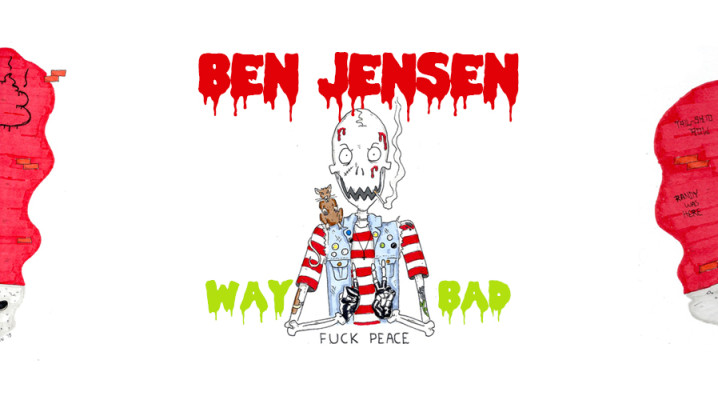 on October 22 | in art, BLOG, featured, independent hustlers | by LAfever | with 6 Comments

It’s not often that we rep content from our neighbors to the North, but when we do, you know it’s going to be dope. Ben Jensen aka punk artist Way Bad not only hails from Canada, but he lives in my former hometown of Ottawa (learn yourself here). Despite the trappings of living not in Toronto/Vancouver/Montreal, Ben has been making a name for himself with his original artwork landing him some impressive collabs with Vans and Raised By Wolves. We chopped it up with Ben about how Way Bad came to be, his collabs, and how his artwork is finding its way onto peoples’ skin. Read on!

YO BEN! TELL US ABOUT YOURSELF, WHERE YOU LIVE, AND WHAT YOU DO

My name’s Ben Jensen, I live in the beautiful Centretown neighbourhood of Ottawa, Canada, the city I was born and raised in. As a day job, I do masonry, which is awesome cause I get to drive a big truck and use diamond saws and do other cool mason shit, and get people stoked cause I fix their houses up.

Then, at night and a bit on weekends, I do the whole art thing; I draw all my weird, gnarly, juvenile bullshit, and sometimes people get me to design tee shirts, or album covers, or flyers, or whatever, and that’s awesome, too.

I also skateboard, listen to punk rock, listen to gangsta rap, hang out with the fam (wife and two kids), play Spider Solitaire on my iPhone… all sorts of real cool shit.

HOW DID WAY BAD COME TO BE?

A little over four years ago, after my daughter was born, I abruptly stopped partying all the time, because — no matter what your idea of “keeping it real” and being a “cool dad” is BEFORE you have kids — once you actually HAVE kids, you realize that being wasted all the time when you’re responsible for a tiny human is kind of a douche move.

So I was finding myself sitting at home on the couch a lot after the kid was in bed, and just started occupying my time by gravitating back towards drawing, something I’d been into as a kid, but kinda let drop to the wayside.

A friend of mine — Davey Quesnelle — had a Tumblr page at the time where he was recording and posting a song a day for a year.  Which is insane.  Then, our mutual friend Mike Laderoute, got inspired by Davey and started a DRAWING-a-day Tumblr.  Then I just ripped them BOTH off and started my OWN drawing-a-day Tumblr: Way Bad.

The whole ‘a-day’ aspect didn’t last long, but I still kept posting shit to it.

HOW DID YOU DEVELOP YOUR CARTOON/ILLUSTRATION AESTHETIC? WHAT ARTISTS INSPIRED YOU?

I feel really lucky that I managed to develop a style pretty organically, but it’d also be dumb to not recognize my biggest influences: Jay Howell, Dirty Donny, Neckface, and Edward Gorey would probably be the big four. There’s tons of other artists I love, but as far as influences go, that’d be them.

AS A KID FROM OTTAWA, HOW DID THE VANS COLLAB COME TO BE?

They emailed me outta the blue. It was kinda crazy. I checked real hard to make sure it wasn’t somebody pranking me before I responded to them. 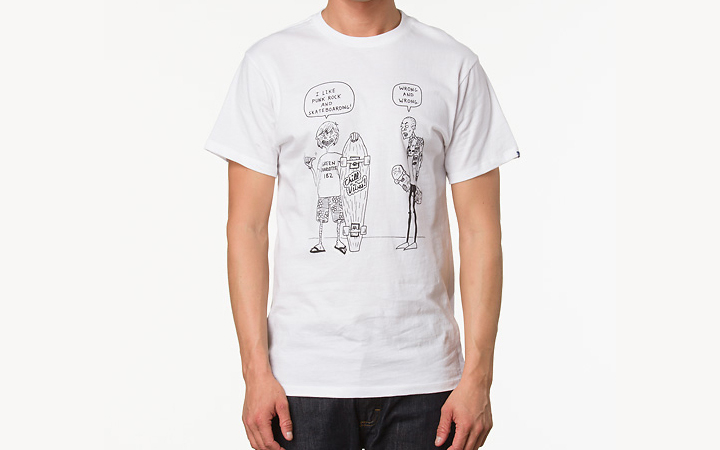 WHAT HAS BEEN YOUR FAVORITE PROJECT SO FAR?

I gotta pick two. First of all, I was super stoked to do a shop deck for my local shop, Antique. Antique’s a rad, core shop that does a lot of good for the community. They get skate parks built, and they even run a charity called 4 Pivot’s Sake where they go into low-income neighborhoods and hand out completes that they’ve refurbished from donated parts.

This deck was EXTRA awesome to do though, cause it honoured a local skate crew of dudes who not only rip, but are also hard-working and super-nice guys all around. Shout out to the Bahd Brains and all the dudes at Antique! 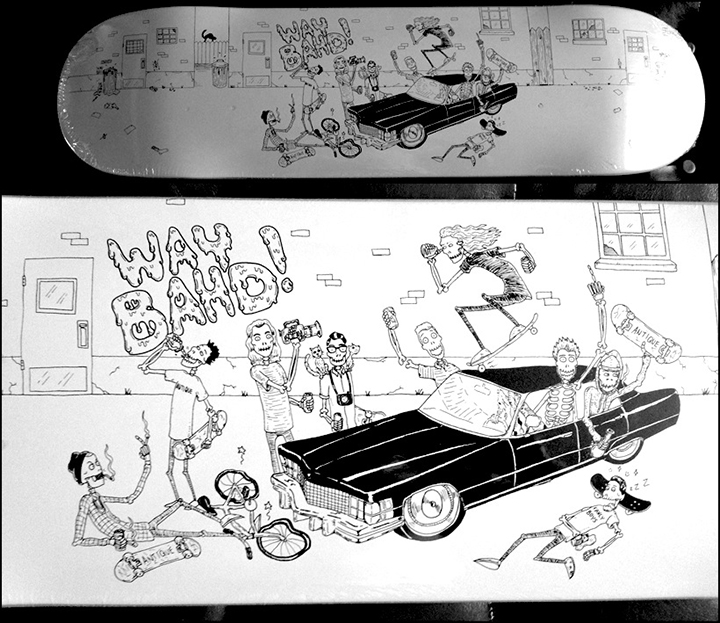 Second of all, I’m definitely stoked on my collaborations with Raised By Wolves.  Such a great brand, and started by two dudes from Ottawa.

Oh wait: this isn’t EXACTLY what you’re asking, but I gotta add that I’m crazy stoked at all the kids that get tattoos of my drawings.  Scared for their futures, sure, but mostly stoked and thankful. 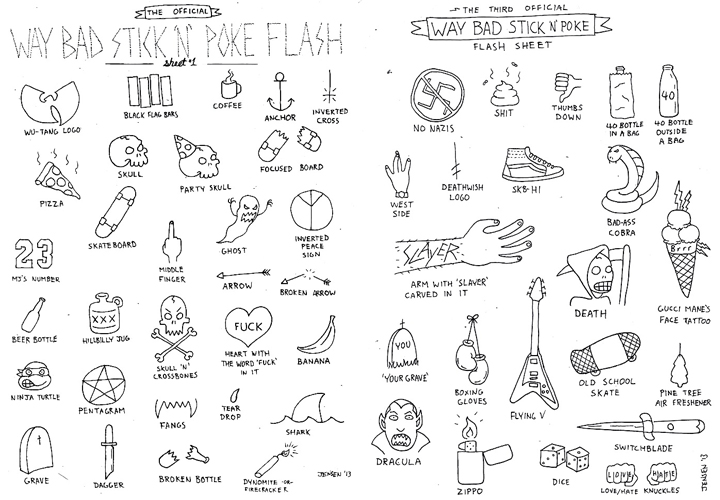 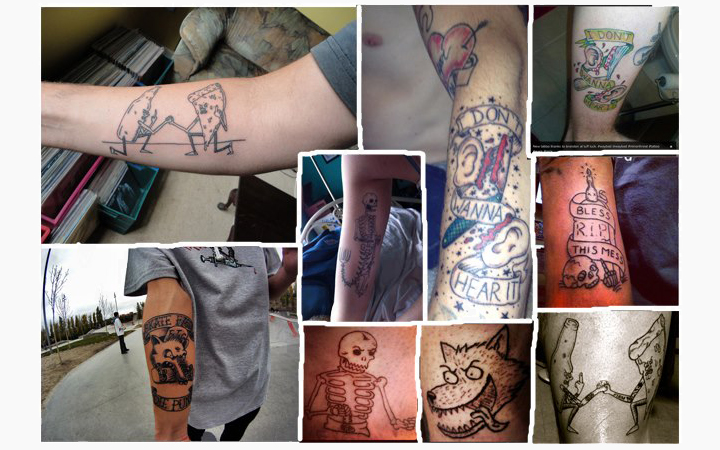 IF YOU COULD DO THE ALBUM ART FOR ANY ARTIST, WHO WOULD IT BE?

WHAT’S YOUR DREAM PROJECT OR COLLAB TO WORK ON?

I definitely wanna do more skate decks. It’d be sick to put in work for Creature, cause A) they’re one of the sickest teams around and B) they always get the best artists. They’ve had Dirty Donny, Jay Howell, Scarecrowoven, Travis Millard… so that’d be a dream job, for sure.

Oh, and Thrasher. I wanna work for Thrasher. It’s the bible, y’know? And I’ve really really wanted to work for Wu-Tang ever since answering that last question.

WHAT HAS BEEN YOUR BIGGEST ‘OH SHIT’ SUCCESS MOMENT?

Probably the Vans collab.  When I got that email, I kinda felt like I needed to lie down.

HOW HAS THE INTERNET AND SOCIAL MEDIA HELPED OR HURT YOU AS AN ARTIST?

It’ll be kinda hard to answer this question without sounding like a dick, so I won’t bother trying to NOT sound like a dick:

Social media’s helped me in that I’ve managed to do some pretty cool shit without really trying that hard. It’s almost like no one has to pay their dues anymore. It’s so easy now to get your shit out there and seen. I also have my strong work ethic to thank, but — as far as the illustration aspect of my life is concerned — all my work energy’s just been going into doing the actual art, not into selling myself. Not that I’m SUPER successful or anything, but I feel that any success I HAVE had, is largely luck.

For someone as bad with computers as I am, it IS a bit stressful keeping a Tumblr, Facebook and Instagram updated, but that’s the shit you gotta do nowadays, and it’s nowhere NEAR as hard as grinding away with your portfolio under your arm going door-to-door trying to sell your shit, trying to get work.

WHAT CAN WE EXPECT NEXT FROM WAY BAD?

I’ve started doing work for MAXIMUM ROCKNROLL. So I’m pretty stoked about that.  I’m doing ads, stickers, pins, got a cover coming up. Super rad. So in case anybody out there’s wondering whether they’re punker than me: you’re not.

Got the new Raised By Wolves x Way Bad tee shirts coming out REAL soon. Two different designs, and each’ll be available in black on white and white on black.

I’m part of a group show Luke Pelletier‘s putting on in Chicago next month. There’s a bunch of rad artists in it (Michael Hsiung, Teddy Kelly, Sean Morris, John Malta, Tim Olson, Austin England, and more). I’m actually gonna be at this one; I don’t normally go to shows my pieces are in, I’m too tight to buy plane tickets. But I’m sucking it up and going for it this time. It’s gonna be rad.  We’re gonna see some of Nina’s (my wife) friends, too. 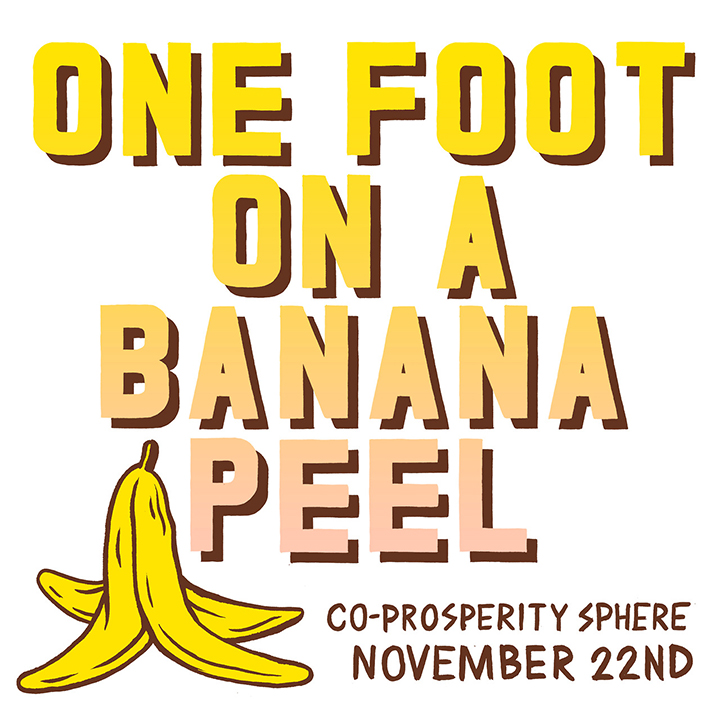 Wolves Kill Sheep‘s gonna be releasing three Way Bad shirts next year. I’ve also got a bunch of of collab zines coming out that I’m excited about.

You can go to the Way Bad Tumblr, you can go to my Facebook page (but Facebook’s kinda wack for this sorta thing; do the Tumblr instead if you can), and you can follow me on Instagram. But only if you can stomach the occasional random shit. No cats, though. And hardly ever food. Definitely no selfies.

Ben Jensen is a super rad dude making no-frills punk drawings and art. We’re stoked to see the Raised By Wolves collab which is dropping in the coming weeks. Ben told us how it came to be:

“I hooked up with Raised By Wolves when they found my work on the internet and reblogged it on Tumblr.  I was already a fan of the brand and gave them a shout.  They didn’t realize I was ALSO an Ottawa dude (they were still in Ottawa at the time), and they commissioned me to do a couple shirts. (Those were the ‘Pizza And Beer’ shirt and the ‘Skeleton Party’ shirts.)”

Check out some of Ben’s work below and stay tuned for more on the collab. Thanks to Ben for taking part in the feature! 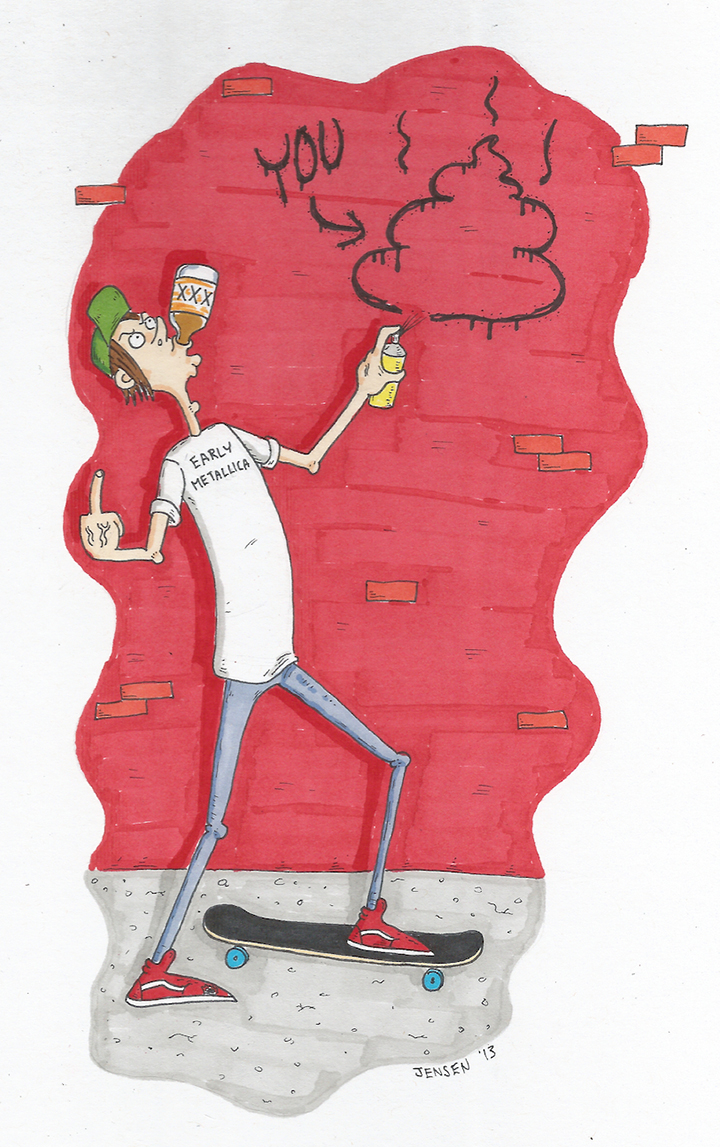 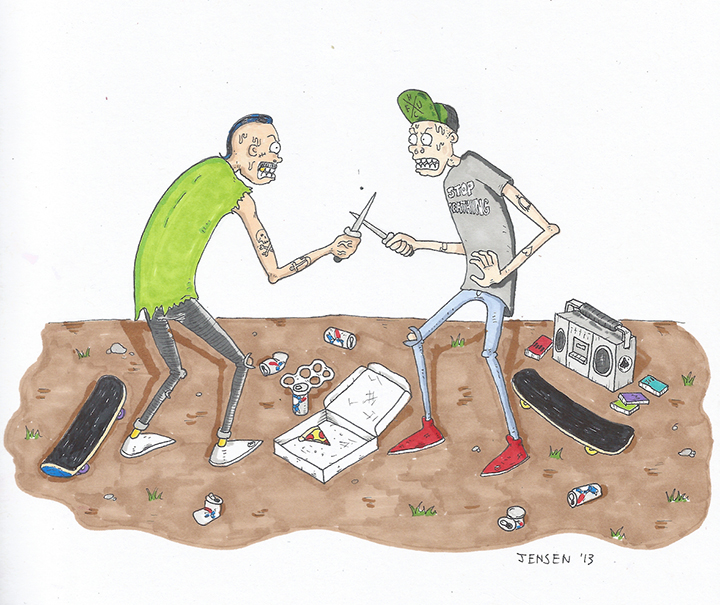