If you’re a regular follower of Dopamine36 then you already know damn well who Ben Jensen (aka Way Bad) is. For those of you just joining us, Ben is a rad artist from Ottawa who we’ve featured before, has collab’ed with Raised By Wolves and Vans, and is generally hilarious. He previously took us behind the scene at the One Foot On A Banana Peel art show in Chicago back in November, and now he’s back with more riveting coverage of his latest show, a collaborative effort with Toronto artist Christian Stearry at Antique Skate Shop in his hometown Ottawa. The show, sponsored by Vans and Beau’s Beer, showcased both artists’ work while raising money for Antique’s #1squarefoot initiative to build a new (much-needed) skate park in downtown Ottawa. Before you read Ben’s excellent eye-witness account of the show I should note that the last event I went to at Antique got pretty out-of-hand and featured an improvised beer slip-n-slide on the floor, skate tricks off the counter, and some nudity. Read on and thanks to Ben for the coverage! Make sure to check out his work!

Hey, internet!  Cub Reporter Ben “Way Bad” Jensen here.  You may remember me from such hard-hitting, investigative journalism pieces as the one I did on November’s ‘One Foot On A Banana Peel’ group art show at Chicago’s Co-Prosperity Sphere.  I bodied that piece so hard that Dopamine 36 asked me to bring my fair-and-balanced journalistic talents back to report on ANOTHER art show.  This one was on February 15th in Ottawa, Canada at Antique Skate Shop, and –whereas the Chicago show featured something like a million and twelve awesome artists– this one only featured two.  But what those two artists lacked in amount of artists, they more than made up for in charisma, handsomeness, pleasant smell-ery, and good-at-art-ness. 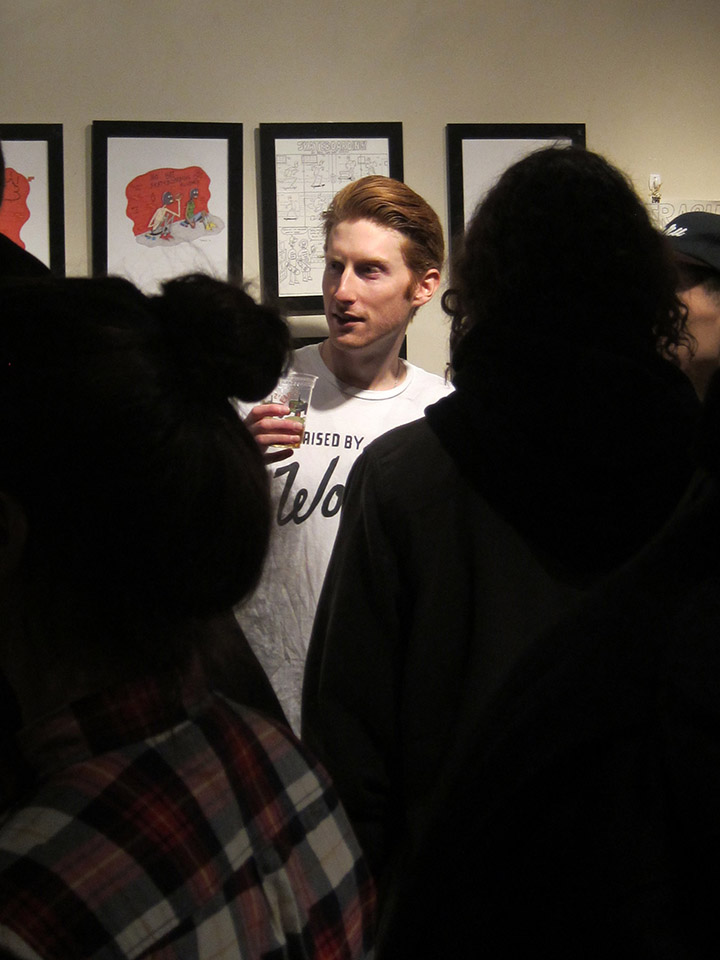 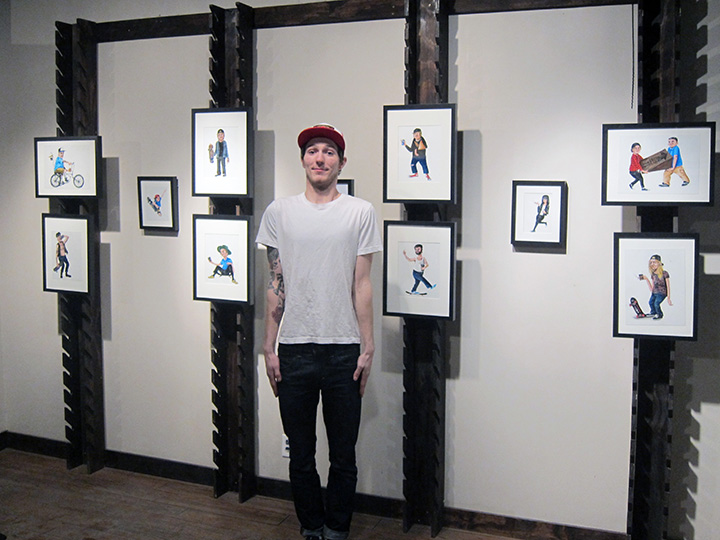 (Christian Stearry mugging with his art)

Since me and Christian started our respective crazy-successful art careers a couple years ago, our works have taken the world by storm, being featured everywhere from our own personal Instagrams to our own personal Tumblrs to our own personal parents’ walls.  We met randomly last summer when I was in Toronto and stopped in at a shop he worked at at the time.  We had a whole bunch of crazy shit in common.  We’d both been featured in the same group show in LA that summer (‘Friends Stick Together,’ curated by Austin England); we’d both had zines released by Blood Of The Young; he’d gotten a horse shoe tattoo done by Franz Stefanik at Okey Doke Tattoo the previous week, and I was getting a horseshoe tattoo done by Franz the next day (yeah, yeah, hipsters getting horseshoe tattoos — REAL big coincidence, right?  SAVE IT, smart guy); his birthday is February 15th, mine’s the 13th, but we got YEARS between us (I’m old enough to be his OLDER BROTHER, fer chrissake!); we’d both done deck graphics for our local skate shops… all sorts of crazy shit. 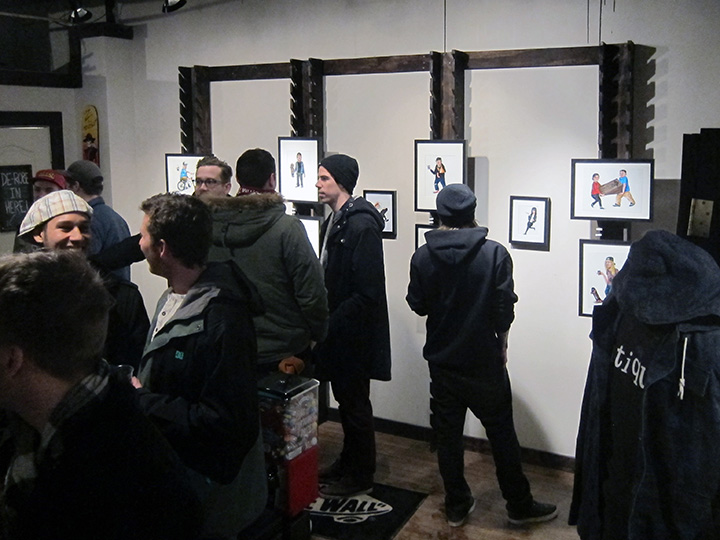 (A look at the action going down, note the No Fun ‘Loonie Trap’ gumball machine)

And now, after Christian sent me an email with the idea, the two of us were showing together at Antique Skate Shop on Christian’s birthday for one super elegant-ass evening of art. 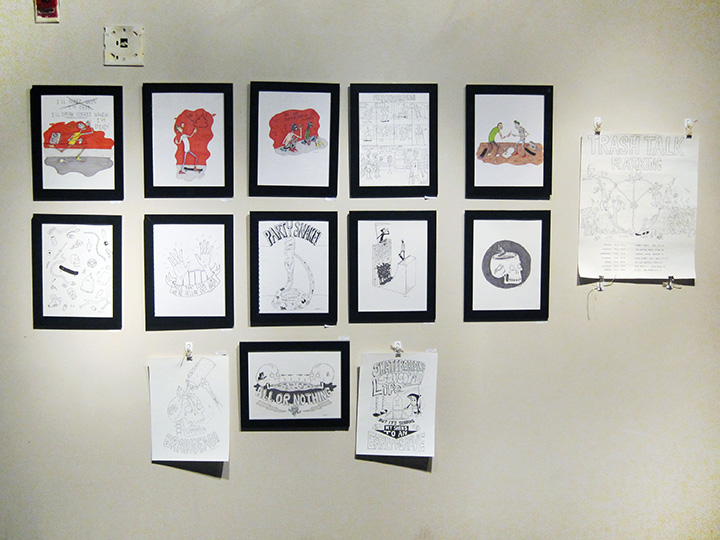 After reading what I wrote about me and Christian being so awesome, you’re probably assuming that we had no help making this NIGHT awesome.  Well, you’re wrong (but I’m humbly flattered you think that way).  Vans helped make it awesome by sponsoring it, and by sending me a size 66 Sk8-Hi to decorate.  (Fun fact: it’s size 66 cuz Vans was founded in ’66.  BOOM.  Journalism.)  Local beer company Beau’s All-Natural Brewery helped make it awesome by selling their incredible beer at the event.  No Fun Press made it awesome by pressing a bunch of Way Bad and Christian Stearry pin sets for the event, and by coming to the show with their “Loonie* Trap” gumball machine full of mini No Fun/Blood Of The Young stuff.   (*A loonie’s a one-dollar Canadian coin; it’s just one of many things we kinda fucked up in Canada just for the hell of it.  BOOM.  Journalism again.  I am DESTROYING this assignment.)  Man, kids go HAM for No Fun and Blood Of The Young, especially when shit costs just a buck.  Antique Skate Shop made it awesome by hosting the whole thing, tending bar, playing Slayer, and donating all bar proceeds to their #1squarefoot project, which raises funds to build a much-needed downtown skate park.  Ground-breaking’s this spring.  Partial proceeds from No Fun pin sets went towards that, too. 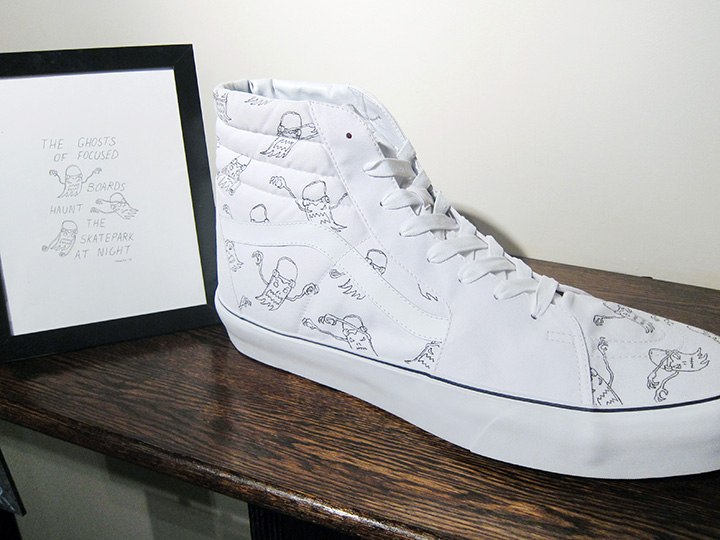 All in all, it was a great night, with a good turnout.  There was a charitable excuse to get drunk; people got to see a shoe that’s bigger than normal shoes; ordinary, everyday, one-pant-leg-at-a-timers got to be in the presence of two great artists (and, for $20, got to make eight seconds of uninterrupted eye contact with them); a bunch of money was raised for #1squarefoot; even more money was raised to keep me and Christian Stearry in ‘Raris and fur coats — I might even have enough left over to buy a Dipset cape. 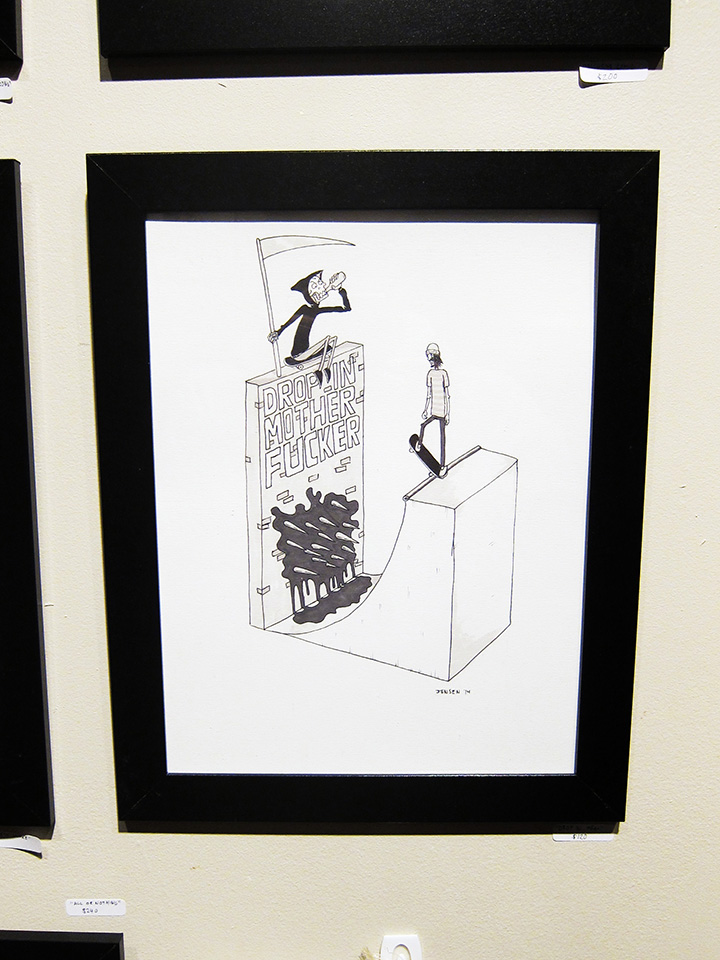 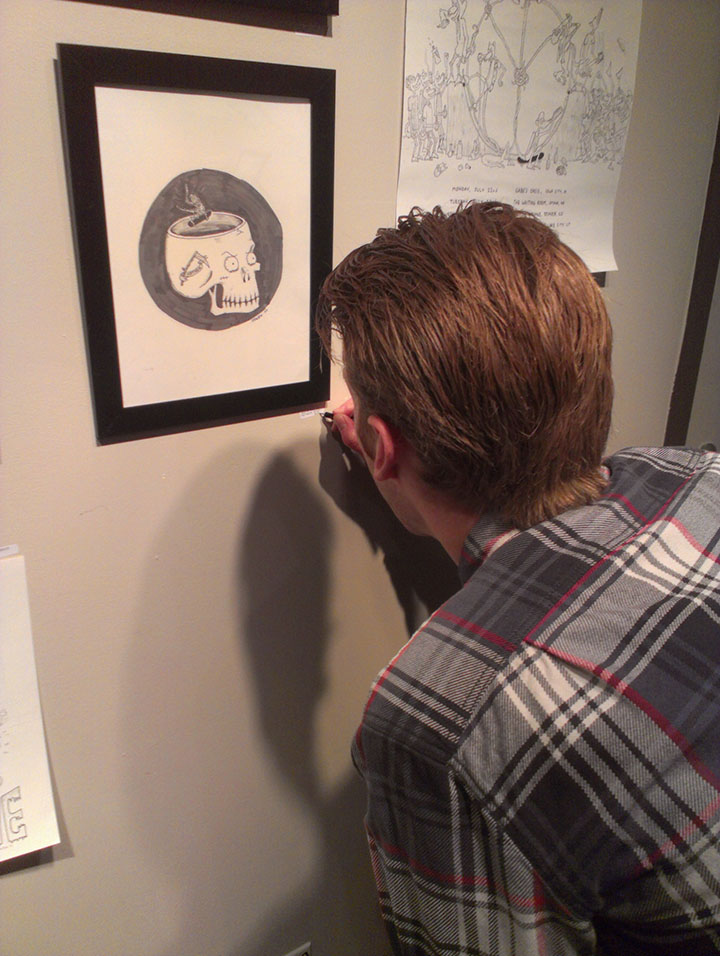 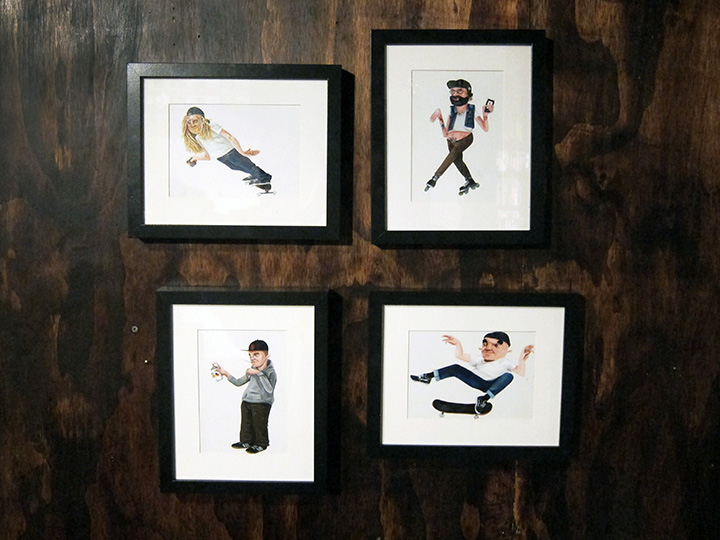 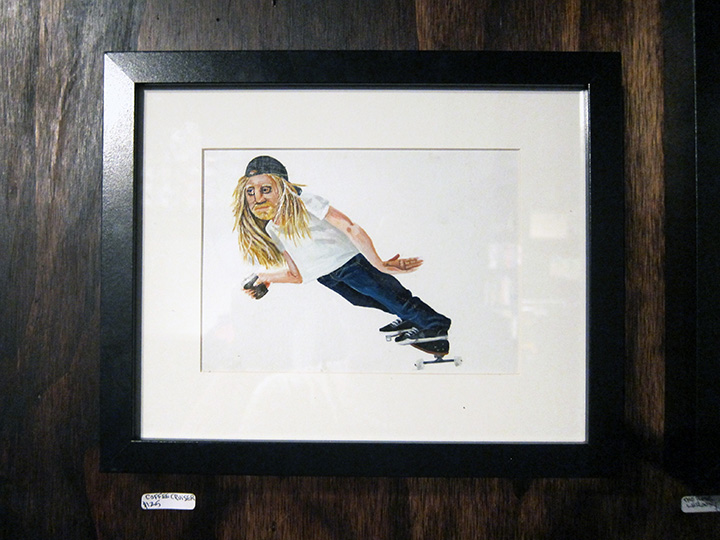 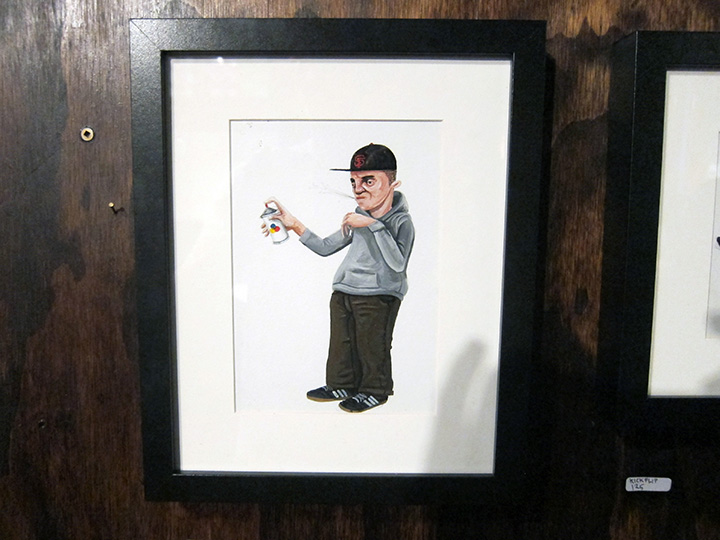 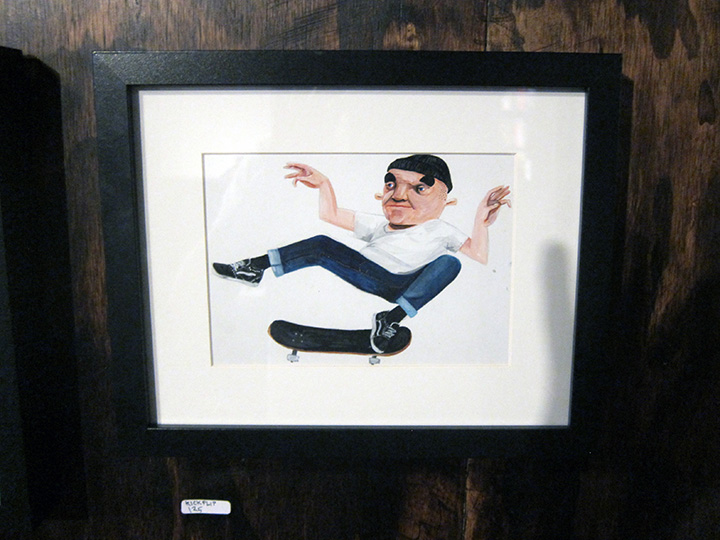 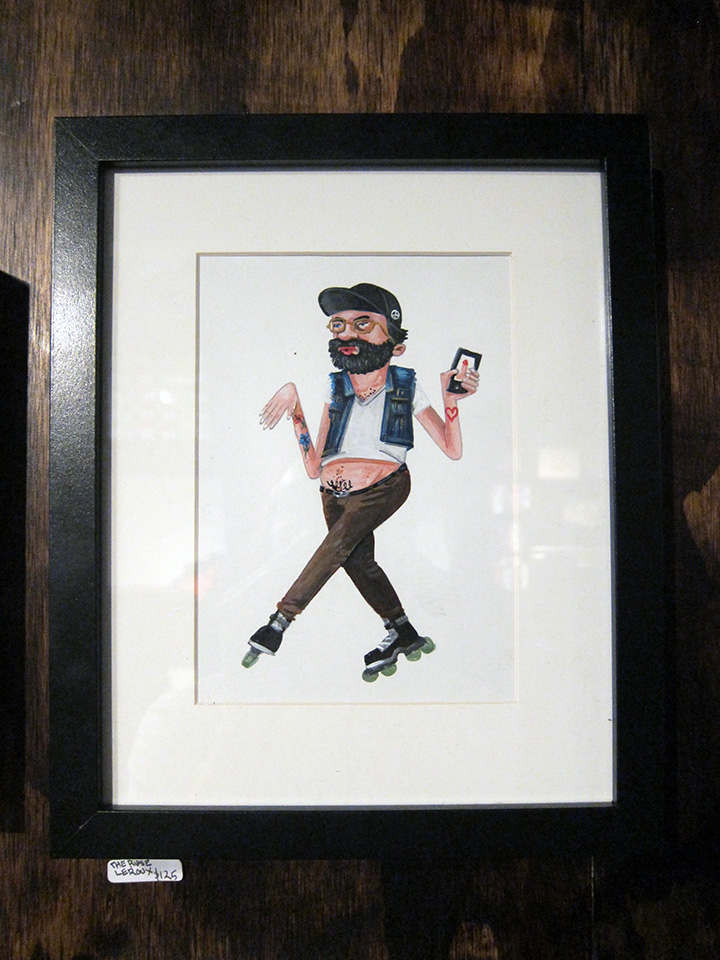 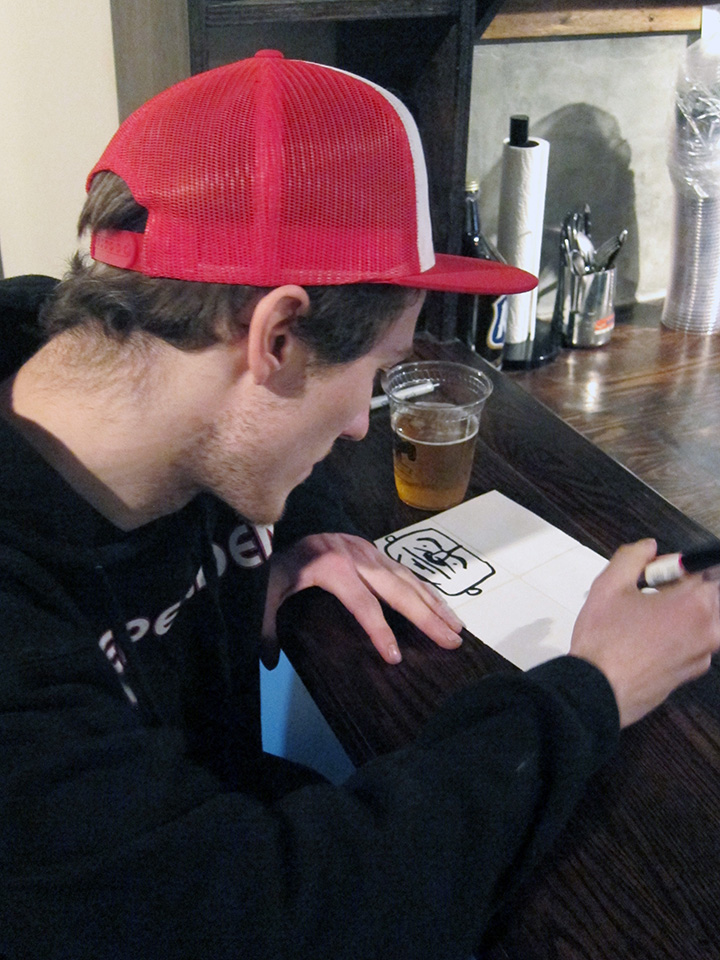