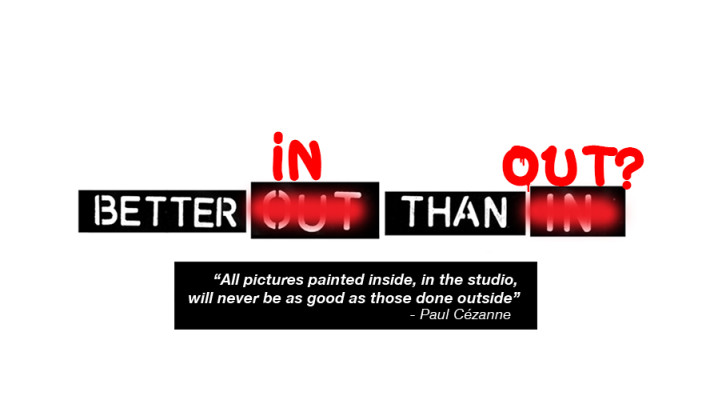 Better In Than Out? Looking At Banksy From The Other Side

on October 18 | in art, BLOG, featured, independent hustlers | by LAfever | with 2 Comments

This month we’ve been following famed British graffiti artist Banksy, as his “Better Out Than In” series hits a new spot in New York City every day. The installments have ranged from simple and subtle pieces, like his Geisha girls, to elaborate multi-dimensional pieces complete with audio guides, like his War Horse piece. In the first half of this month alone, Banksy has also introduced three roving installations that show up in a different part of the city each day (The nature truck, the ‘Sirens Of The Lambs’, and the Ronald McDonald shoeshine statue). Needless to say, this hasn’t been a basic wheatpasting poster job, but a cleverly-devised and executed mobile art show.

The purpose of all this was supposed to be to unite New York by bringing attention to each neighborhood, while getting people to appreciate and seek out art outside of traditional galleries and art spaces. However, it’s becoming more and more clear that Banksy won’t have his way. As time wears on and this collection gains more notoriety, the public reactions have been getting crazier to say the least.

In East New York, a group of dudes have set up shop around his ‘Beaver’ piece, blocking it from the public and guarding it around the clock so they can charge people $20 to see it and take a picture.

In Queens, a group of taggers including Problem Child NYC, Team Robbo and Topic defaced Banksy’s ‘Gladiator’ piece less than a day after it went up. The owner of the building was later interviewed and said he loved the original piece and was looking to preserve the wall. 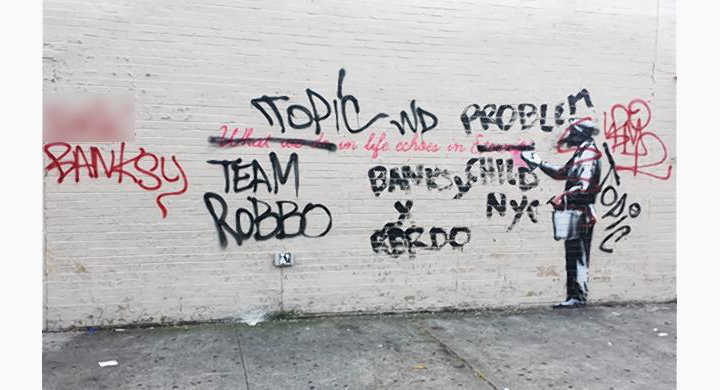 Yesterday’s aforementioned ‘Geisha’ piece was starting to get vandalized only hours after it went up, before an onlooker stepped in and stopped the tagger, throwing him to the ground. 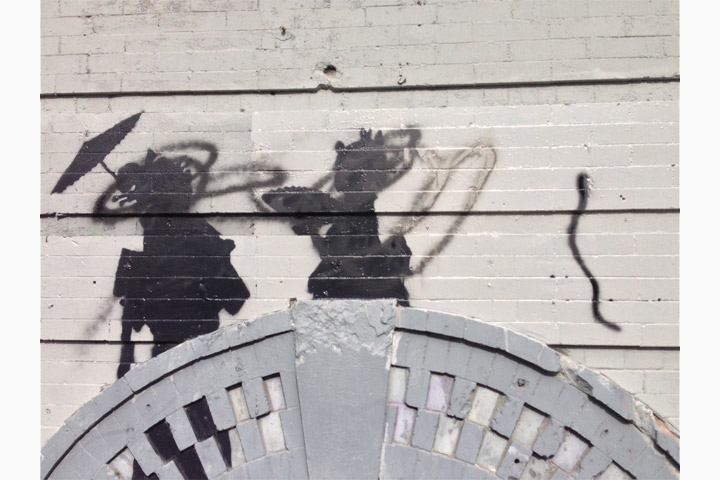 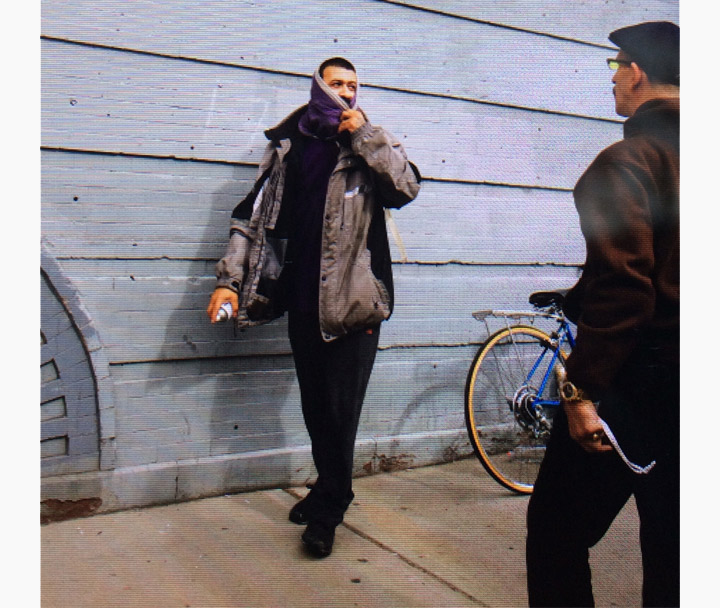 Even the authorities are getting in on it. Mayor Michael Bloomberg said that Banksy’s work is ruining peoples’ properties and he needs to be stopped. Meanwhile, the NYPD have stated (much to Banksy’s amusement) that they will arrest him if he’s caught during his residency.

With all the heat Banksy is generating, his Better Out Than In series is gaining more notoriety by the day. Today’s piece is his most literal yet, hanging two huge pieces under West 24th Street and setting up a viewing bench, creating an outdoor gallery space. In light of all the vandalism (and the fact that Banksy originals sell for a pretty penny), Banksy has seemingly hired a security guard to keep watch over the pieces.

With all this considered, is art really ‘better out than in’ if people are going to destroy it or try to take it for themselves? Banksy doesn’t seem to care either way, as he hasn’t responded in outrage to any of the destruction of his installments. I suspect that Banksy is achieving exactly what he set out to do, and that is to get people talking about art and whether graffiti falls into that category. If these pieces weren’t done by Banksy would anyone care if they were stolen or painted over? Probably not. On the flip side, if Banksy put a new piece in a gallery each day for the whole month would people pay each day to see the newest one? Not likely.

The bottom line is that Banksy is a guerilla artist and he’s basically tagging (artfully though!) different spots around New York. Other graffiti artists see this and they want to tag the spot too, that’s how it works. So, if you get to see these pieces firsthand before they’re gone then count yourself lucky. If not, then you can still follow the adventure at BanksyNY. With the end of the month closing in in 13 days it’ll be interesting to see if public opinion changes, if Banksy speaks out, and if the vandalism continues. Stay tuned.