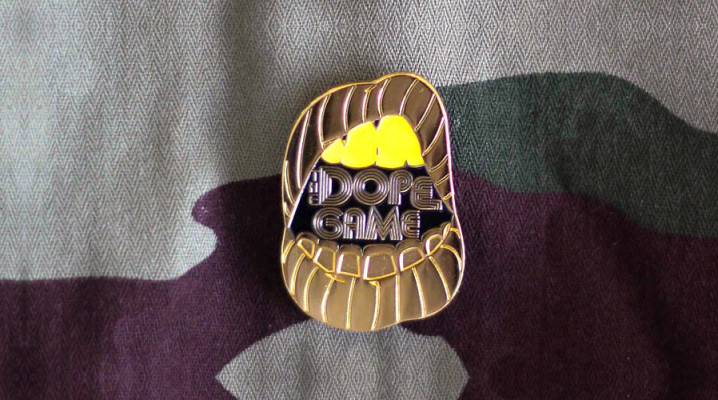 Running The Dope Game In The South

on November 22 | in BLOG, featured, independent hustlers, Streetwear | by LAfever | with 2 Comments

Courtney Howells is a boss. Not only is she running one of the hottest new streetwear brands, The Dope Game, coming out of the South, she’s mentoring other young brands trying to make it in the game. Rather than trying just to stomp the competition, she’s giving them a leg up. After starting up almost ten years ago, Courtney has grown both the brand and the burgeoning streetwear community in Louisiana. In an industry ruled by dudes, she’s proving that her perspective is just as relevant, and just as, well, dope. We chopped it up with Courtney to get some perspective on The Dope Game, streetwear in the South, and holding her own in the industry.

I’m Courtney Howells, founder and creative director of The Dope Game, based out of Baton Rouge, Louisana.

HOW DID THE DOPE GAME COME TO BE?

The Dope Game started circa 2003-2004 at Baton Rouge High. I made custom t-shirts for myself to match different shoes (“sneakerhead”). Friends and family began asking for them so I started to sell them. One shirt had the word ‘dope’ on it and that’s just what people started to refer to them as (“Hey, let me get a dope shirt”).

WHAT’S IT LIKE AS A WOMAN LEADING A BRAND IN THE STREETWEAR GAME?

That’s an interesting question actually. What initially brought me into streetwear, and I’m sure it’s the same for a lot of people, was sneakers. I’ve been collecting sneakers since middle school, and streetwear used to be some of the only brands that would cater to the sneaker community. It’s sometimes hard to find my size (not too many XXS and XS in the size runs) but it isn’t all that bad being a woman in a male-dominated industry though. It’s a unique perspective. And if the saying “if women like it, men will buy it” is true, it’s sort of an advantage.

ARE YOU GETTING TIRED OF THE ‘DOPE’ PUNS YET OR IS IT BECOMING A PART OF THE BRAND?

Yeah, it’s gotten a little redundant. But the best part about The Dope Game is that it doesn’t have to rely on just the word ‘dope’. Everything dope is also a part of the dope game. We try to encompass all aspects of ‘being dope’, from the fit of the sweats to Tumblr posts of stacks of cash. It’s all dope. 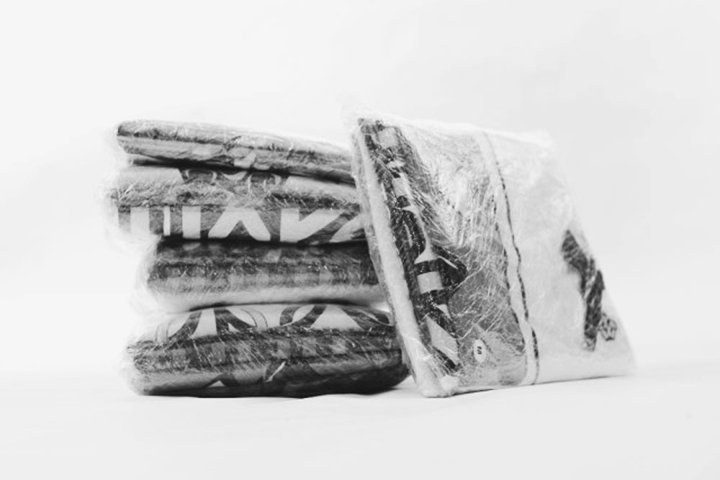 BATON ROUGE IS PROBABLY NOT THE FIRST PLACE THAT COMES TO MIND WHEN PEOPLE THINK ‘STREETWEAR HUB’, WHAT’S THE SCENE LIKE THERE?

True, but the streetwear culture is here and thriving. There just aren’t very many companies/brands that cater to that crowd yet. It’s getting there, but it’s still the South; so it’s a slow progress, but a steady progress.

HOW IS THE DOPE GAME LEADING THE CHARGE WITH NEW BRANDS BREAKING OUT OF THE SOUTH?

The Dope Game has just taken on its first official intern with plans to show them how to run a small apparel company from the inside-out. I try to help anyone who reaches out for advice when I can. So far, I’ve helped two brands get started and hope to help more.

WHAT HAS BEEN THE MOST CHALLENGING PART FOR YOU GUYS SO FAR?

So far, the most challenging part has been patience. We live in a microwave world but the hustle takes time and perseverance.

THE FIRST FALL DROP FOR YOU GUYS WAS THE #80PACK FOOTBALL SHIRT. WHERE DID THE IDEA COME FOR THAT AND WHAT MADE YOU GO WITH MORE CLASSIC STYLING?

Honestly, my aunt was the inspiration for the #80Pack drop. She is a huge Saints fan and a Southern University alum, and wanted something to wear to the games. So I designed those for her.

As far as fit, I saw the rounded hem on another shirt and wanted to incorporate that look. The logo and sewn stripes were both added touches to give the shirts more detail. 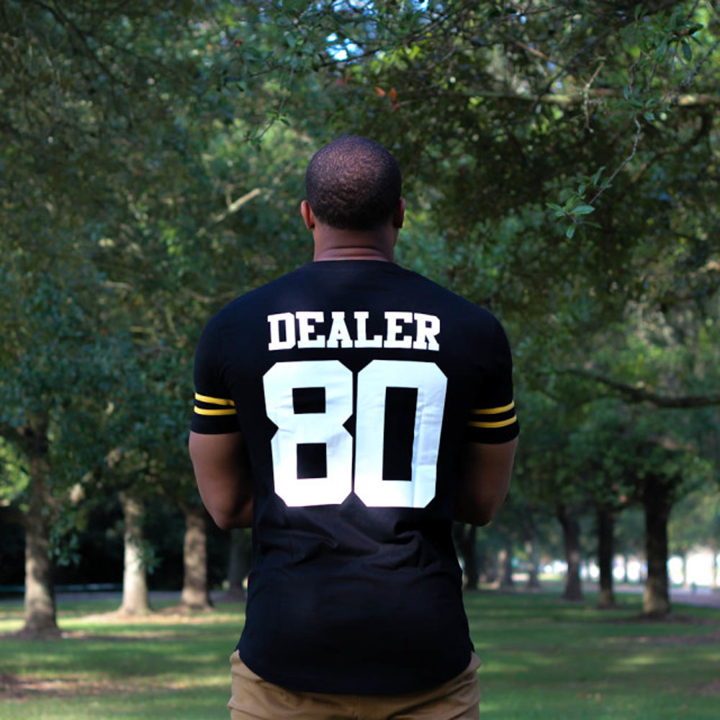 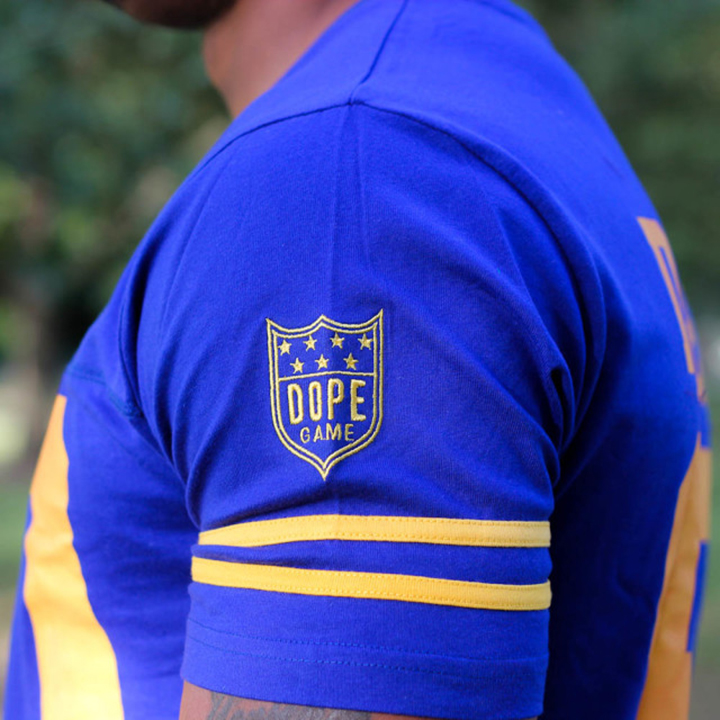 WHAT ARE YOU MOST EXCITED ABOUT WITH THE NEW FALL LINE?

We have begun to transition into capsule collections of 2-4 pieces with more frequent releases. The first drop was the #80Pack and next up is the WIND Pack. So I’m excited to be picking up the pace.

HOW DOES THE INTERNET AND SOCIAL MEDIA INFLUENCE THE WAY THE DOPE GAME DOES BUSINESS?

The internet has a huge influence on The Dope Game. There would be no Dope Game without the internet. We have store accounts as well, but 70% of sales are online. Social media is how we find out what our customers like and don’t like.

IF YOU COULD DRESS ONE CELEBRITY IN YOUR GEAR, WHO WOULD IT BE AND WHY?

If I could dress any celebrity in The Dope Game it would be Pharrell. His style is crazy and he juxtaposes edgy with fun (like gold teeth with a straw fedora) which I try to do a lot of with the brand.

WHAT CAN WE EXPECT NEXT FROM THE DOPE GAME?

In the future, you can expect more detailed pieces from the brand as well as more collaborations.

There’s lots of great stuff coming out from The Dope Game so be sure to check out their online shop for the latest. They also have a Black Friday sale starting next Friday where you can get some crazy deals on mystery boxes so check out the poster below. 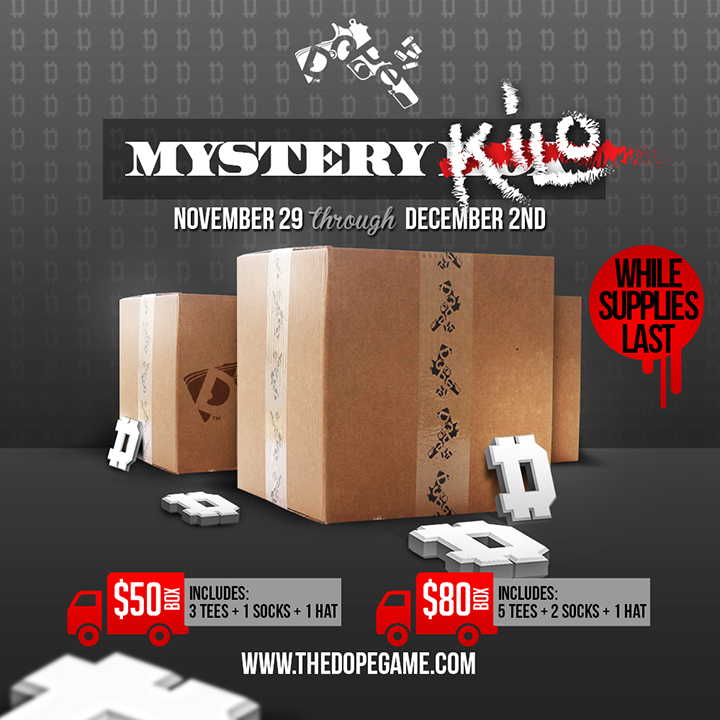