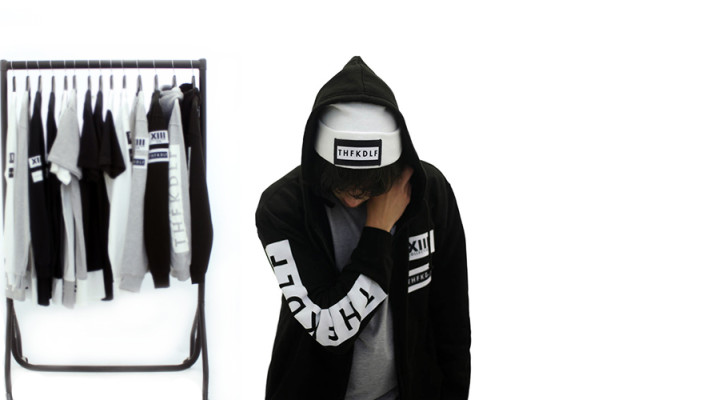 THFKDLF: Investing In The Future Of Streetwear

on March 5 | in BLOG, bosses, featured, independent hustlers, Independents | by LAfever | with 15 Comments

THFKDLF are a tight-knit team building a thriving streetwear empire in the UK, and they’re doing it all on their own. Based out of Shropshire, a relatively unassuming county in Central England bordering Wales, THFKDLF have their sights constantly set on the future, and that has meant investing foremost in production and equipment and pushing forward with hustle and raw ambition. See, when many brands start out in the streetwear game, charting out your long-term future is not usually the mandate. Many brands spend the first few years outsourcing everything to keep costs down while working in the frustrating world of order minimums and design restrictions. THFKDLF flipped the model, producing smaller ranges of gear, while investing their revenues into getting a sublimation printer and local office space. Their strategy has paid off, huge. In less than a year they’ve managed to become one of the UK’s largest sublimation printers in a market that’s growing incredibly fast. We caught up with Daniel Tomley, one of THFKDLF’s three founding members, to find out how these self-taught guys have done so much, so fast, and what’s next for one of the UK’s most exciting new brands. Read on and make sure to check out THFKDLF’s online shop for their newly-dropped XIII collection. 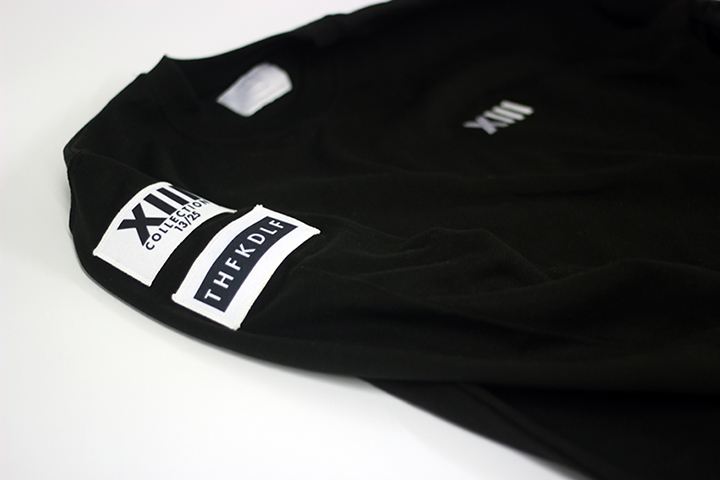 WHAT MADE YOU GUYS DECIDE TO START THFKDLF?
We had ideas for clothes, and we felt the best way to put these ideas across would be to start a brand and try to sell them through that, it seemed a more appealing way to start then trying to sell blank clothes. 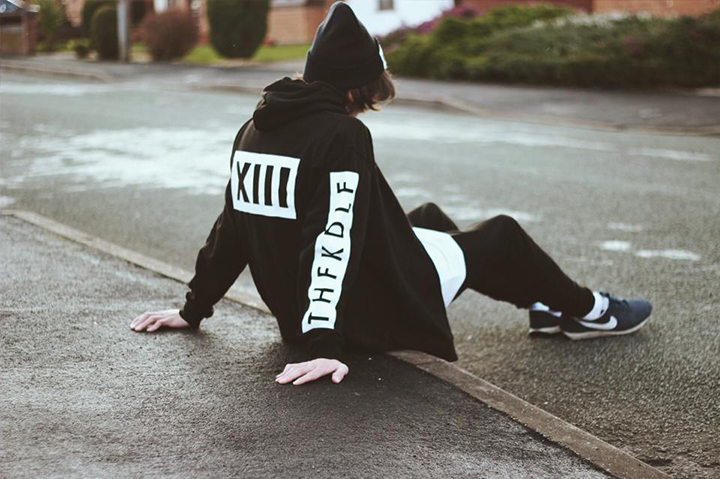 YOU GUYS ARE SELF-TAUGHT, WHAT HAS BEEN THE MOST CHALLENGING THING TO LEARN?
Working out the finer points of producing items has been quite a challenge, its easy enough to sublimate a t-shirt or sew some sleeves on but getting them to standards required has taken some time. The business side of things has probably been the biggest challenge, learning how to do our own accounts and keep a track of everything is tough especially as none of us are the greatest at maths!
WHY IS IT IMPORTANT FOR YOU GUYS TO DO YOUR OWN DESIGN AND PRINTING?
We love to be in control of as much as we possibly can be, it’s so easy for us to design something and try it out this way. An idea can be a physical thing within 30 minutes. 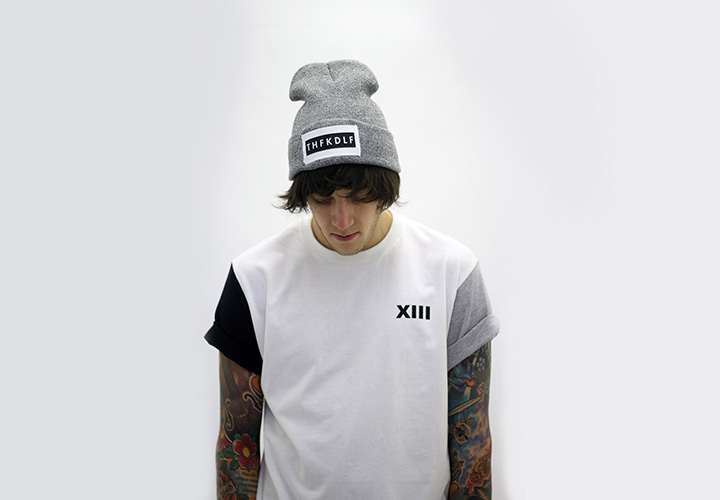 HOW DID YOU LEARN TO USE ALL THE EQUIPMENT, TRIAL AND ERROR? ANY FUNNY STORIES OF PROJECTS GOING TERRIBLY WRONG?
It was all trial and error, it still is with a lot of things. Everyday there seems to be something that goes wrong and we need to figure out why. Sublimation printing can throw up some strange problems and its easy to ruin t shirts before you realize something has happened. There’s still the odd upside down print or garment sewn together the wrong way around.
IN A YEAR, YOU HAVE BECOME ONE OF THE BIGGEST SUBLIMATION PRINTER IN THE UK, WHAT DO YOU THINK HAVE BEEN SOME OF THE KEYS TO YOUR SUCCESS SO FAR?
When we started all the money we made, we put back into the company with the view to owning all our own equipment, we took a risk when we bought our current sublimation printer but we were confident the items we could produce using it would pay it off within a few months. I don’t think there are many other companies or brands who would of invested so much into owning their own equipment. 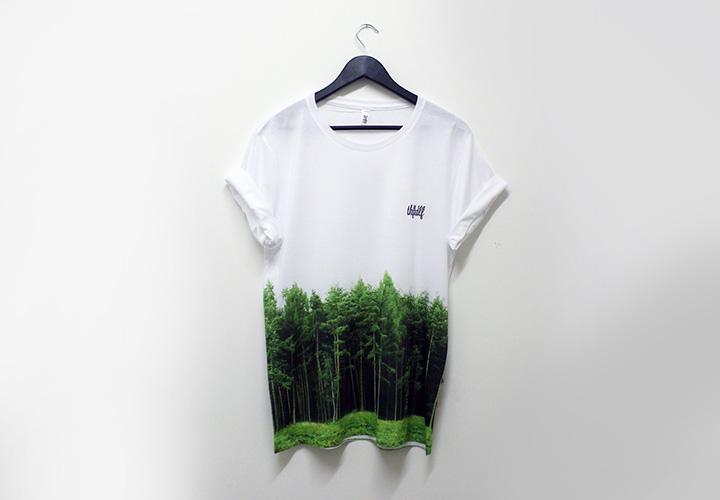 WHAT HAS BEEN YOUR PROUDEST MOMENT RUNNING THFKDLF SO FAR?
The day we moved into our new studio with our new sub printer was really proud. In the space of about 8 months we’d gone from being in the corner of a screen printing studio, to a tiny room of our own, to a full sized studio with office space. We’ve also just taken over the screen printing studio where the brand started. Knowing we’d done all that having started from nothing with no money behind it made us really proud. 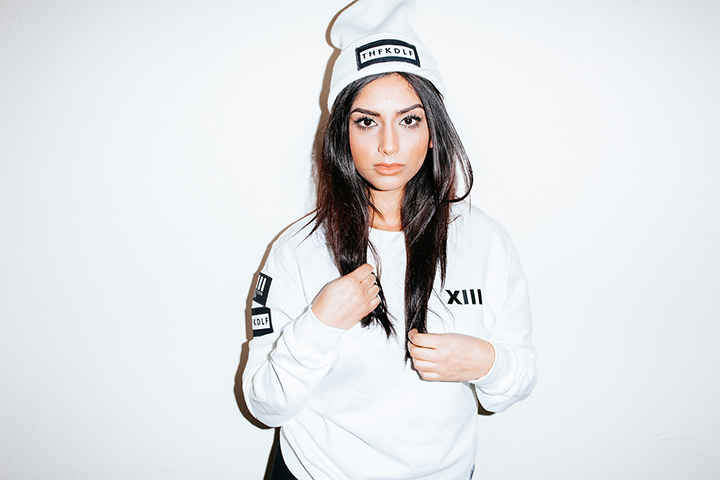 NOW A TOUGH QUESTION, WHAT HAS BEEN THE BIGGEST CHALLENGE FOR YOU AND THE BRAND?
Every now and then we release an item that we’re really excited about and it just doesn’t sell as well as we had hoped. It can be pretty disappointing when that happens but things like that can help us learn as much as the products that sell-out within hours. It just means the next time we release a similar item we can work out what people weren’t into from the last item and change things up.
IN JANUARY, YOU GUYS MADE YOUR FIRST TRIP HERE TO CALIFORNIA FOR AGENDA, WHAT WAS THAT EXPERIENCE LIKE FOR YOU?
It was an amazing experience for us, we’d done a smaller trade show in the UK but nothing like this, it was great to be put into that space with all of those brands and feel like we belonged there. We learned a lot about how these things work and we’re really excited to come back for the next one. Also it was the first time any of us had been to LA. It was unlike any city we’d been to before, the scale of the place was huge. We used the time out there to do a few photoshoots for our S/S 14 range too so we really made the most of our time out there. 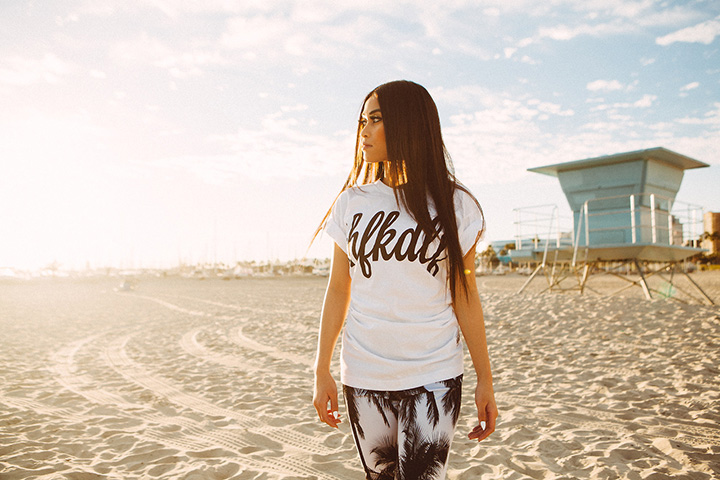 YOU GUYS ARE BASED OUT OF SHROPSHIRE, WHAT’S THE STREETWEAR INDUSTRY LIKE THERE AND IN THE UK IN GENERAL?
The streetwear industry in Shropshire is actually quite strong, for such a rural place there have been some brands coming out of Shropshire and doing really well over the last few years. The guys who started Hype lived about twenty minutes from us. For the UK as a whole things are getting stronger every day, more and more brands are taking things to the next level. I think brands aiming to produce items within the UK are going to grow over the next few years as more and more people are willing to pay higher prices for something unique.
WITH SO MUCH GROWTH SO FAST, WHAT’S NEXT FOR THFKDLF?
We have the next two collections after our main S/S release already planned out, we’re hoping to open a pop-up store in London over summer. When we started just over a year ago we never thought we’d be in the position we are now so in another years time we really have no idea where things could be!
Big thanks to Daniel for chopping it up with us. Make sure to follow THFKDLF on Twitter, Facebook, and Instagram for all their latest. 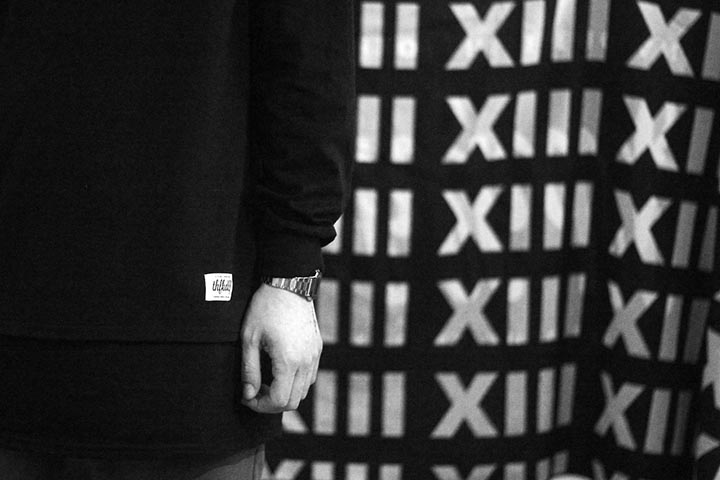