Versalution: Building A Big Brand In A Humble City

on February 21 | in BLOG, bosses, featured, independent hustlers, Independents | by LAfever | with 8 Comments

When we met Eric and the VERSALUTION team at VENUE last month, we assumed they were a big brand from a big city. Their booth made our ‘Best Booth Designs’ recap list and their gear showed real diversity and polish. What surprised us even more than their dope booth and gear was that they’ve been in the game less than two years and are based out of Pomona. After chopping it up with the team we learned that all this dopeness has been the result of their own hard work and dedication. VERSALUTION aren’t fucking around, they do their own printing and design, and they even built that fly booth setup at VENUE. We caught up with VERSALUTION’s owner/creative director Eric Reyes to find out why they do it themselves, how they got started, and how they’re building an empire out of Pomona. Read on and make sure to check out VERSALUTION for their Spring 2014 range in the coming weeks. 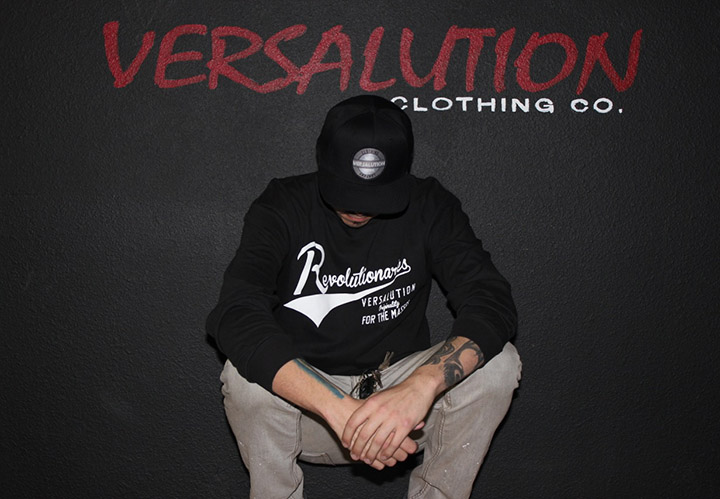 HOW DID VERSALUTION COME TO BE?
Long story, I wanted to start a brand called Versa. But, there was one too many other companies too close to the name. So, I sat back and thought about what I wanted the brand to represent and how people would react when they first heard the name. Being influenced by a lot of people in history that have been referred to as Revolutionaries had a huge impact on how the name came about. Using Versa as a root word, which I define “as a force to be reckoned with”, I morphed it with Revolution and Evolution to make VERSALUTION. Revolution being a sudden change in power and Evolution meaning to forever adapt and continue to evolve.

WHY IS IT IMPORTANT FOR YOU GUYS TO DO YOUR OWN DESIGN AND PRINTING?
I feel it’s super important for myself to have hands in every aspect of design, to keep the direction of the brand’s image on the right path. Printing all our own products gives us the ability to play with colors and change colorways if we decide to. It also allows us to manage production costs and avoid over-producing. 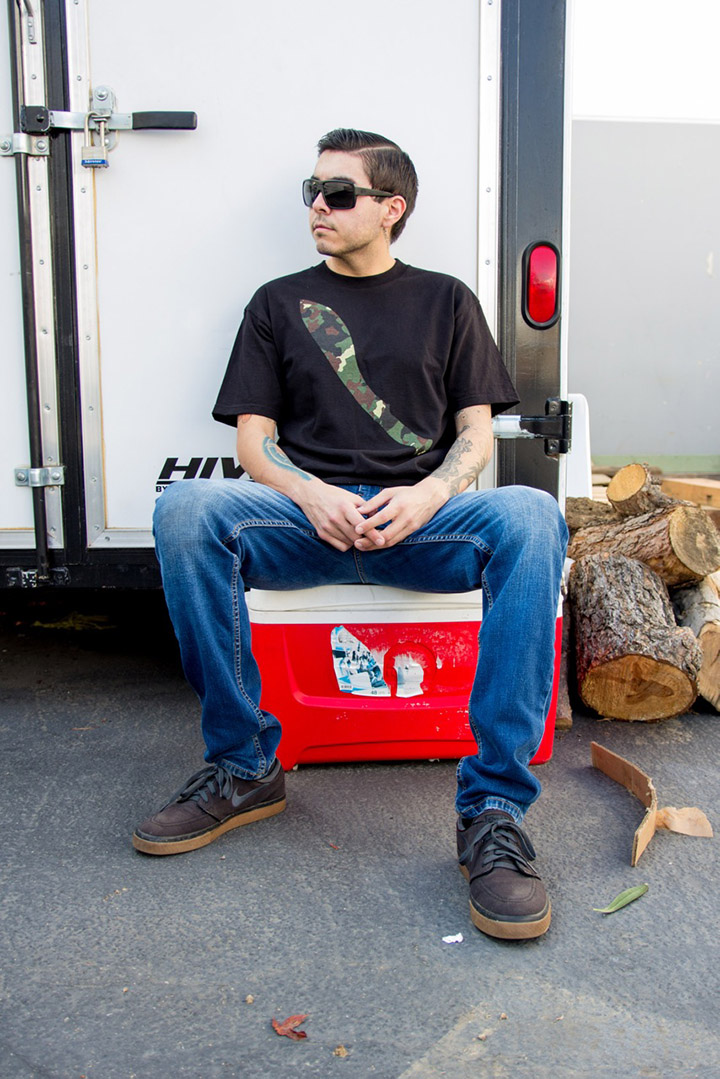 HOW DID YOU LEARN TO USE ALL THE EQUIPMENT, TRIAL AND ERROR? ANY STORIES OF PROJECTS GOING TERRIBLY WRONG?
YouTube haha. When I first started printing I started on a YuDu machine printing tees out of my girlfriend’s room at her parents house. A ton of funny stories, too many to keep track. I think I still fuck everything up till this day and it always goes terrible wrong haha. Fortunately, we recently brought in one of my buddies that screen prints so he’s running our screen printing shop full time now. No more printing for me.

YOU GUYS ARE COMING UP ON YOUR TWO YEAR ANNIVERSARY, WHAT HAS BEEN YOUR BIGGEST GROWTH OR IMPROVEMENT?
Well we technically just hit our 1 year anniversary as a working brand and company. The first year was more of development and learning the trade of screen printing and retail. Last year was our first year in business whole-selling our products and online selling. We’ve had many growths and improvements since we launched last year. Biggest growth being opening our office space and showroom, and improvement being tapping in to cut-and-sew products. Since I started the brand I have always been a fan of designing something from scratch and watching it come together. 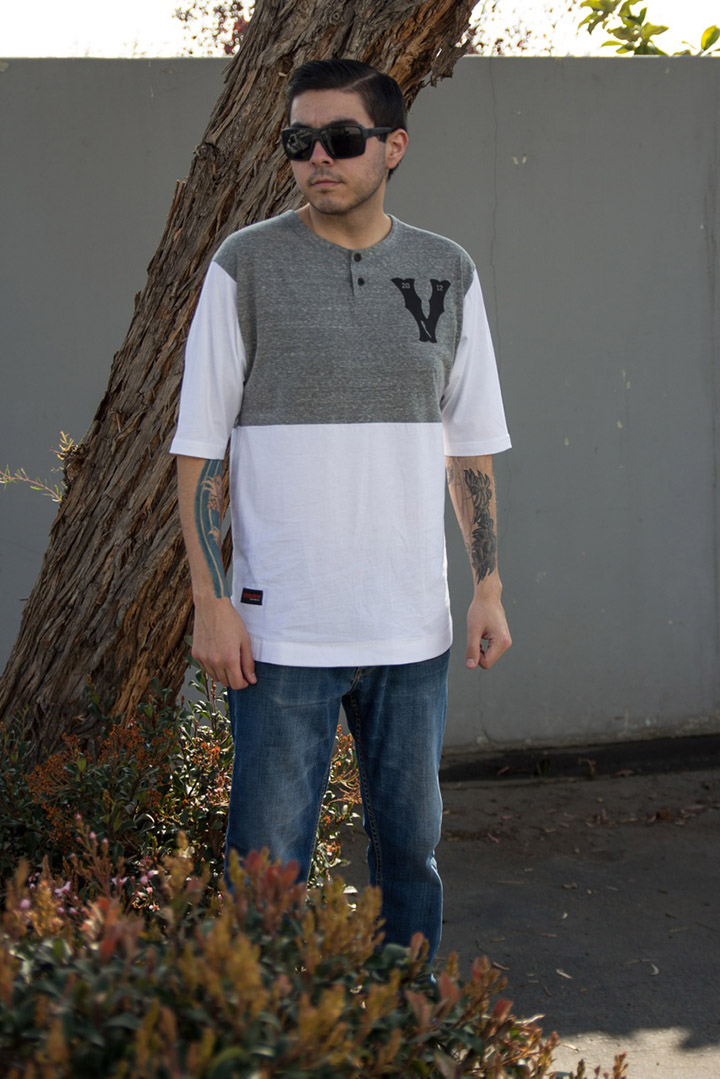 WHAT DO YOU THINK HAVE BEEN SOME KEYS TO YOUR SUCCESS SO FAR?
Definitely my support system. My family, friends, followers and everyone that backs me in what I’m doing with the brand and continues to support and pick up product.

WHAT HAS BEEN YOUR PROUDEST MOMENT RUNNING VERSALUTION SO FAR?
I would say the day I was handed the keys to my office.

NOW A TOUGH QUESTION, WHAT HAS BEEN THE LOWEST POINT OR BIGGEST CHALLENGE FOR YOU AND THE BRAND?
Lowest point has got to be when we contacted our first few accounts and were turned away cause they didn’t really care to hear or even know who we were.

WE’RE SEEING MORE AND MORE STREETWEAR BRANDS BRINGING HEAT FROM OUTSIDE THE MAJOR MARKETS LIKE SF AND LA, WHAT’S IT LIKE BUILDING VERSALUTION OUT OF POMONA?

There’s tons of upcoming brands doing some dope shit and putting on for their cities. Working out of Pomona for me is a sense of clarity, because I’m not surrounded by so many other brands and don’t really have to worry about being drowned out by so many brands trying to come up, or even worry about competing for that matter. 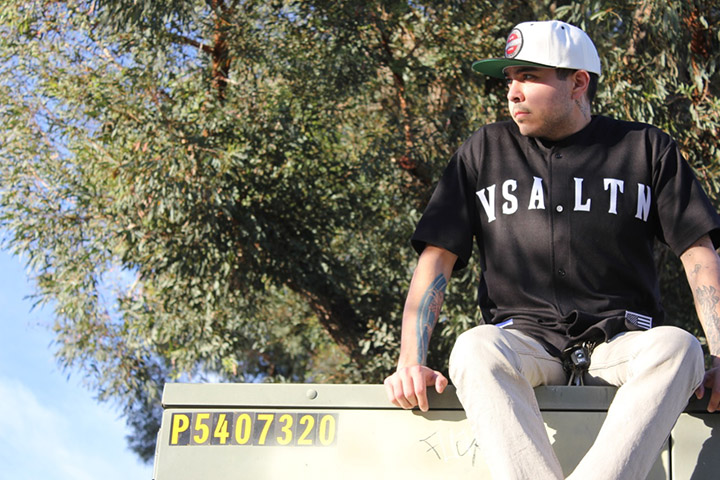 WHAT ADVANTAGES/DRAWBACKS ARE YOU FINDING IN A SMALLER CITY?
My cost of living is lower, so I get to spend more money on Dom Perignon versus dudes that live and operate out of LA haha. I wouldn’t really consider living in a smaller city a drawback at all. I feel your brand develops and makes or breaks due to your drive and your will to become that next big brand or whatever.
VERSALUTION’S SPRING ’14 RANGE WE SAW AT VENUE FEATURES SOME IMPRESSIVE NEW PIECES, INCLUDING CUT-AND-SEW, WHAT INSPIRED THE NEW COLLECTION?
Like I said I’ve always been interested in designing something that would be put together from scratch and this season I wanted to step out of my comfort zone and spend a little more time and develop something people can be hyped about. The focus was simply me seeing what I could do as a designer and pushing my limits a bit. Now that I have the self confidence to do it, there’s gonna be a lot more of complex pieces coming from the brand. 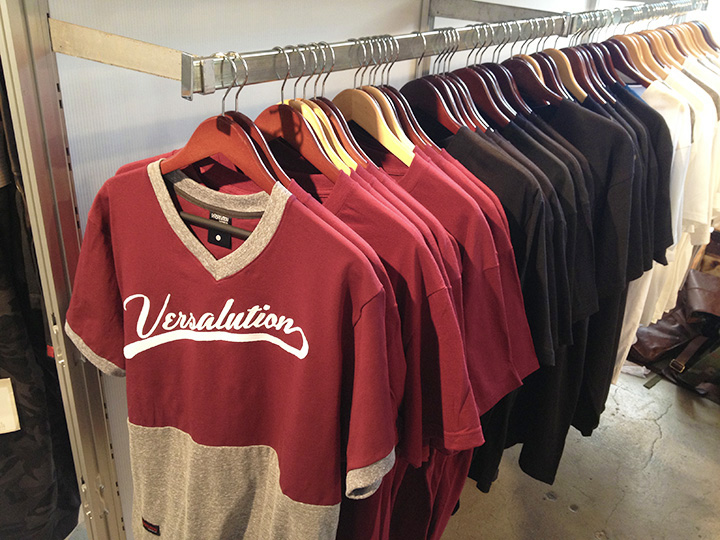 SPEAKING OF VENUE, DID YOU GUYS BUILD YOUR BOOTH TOO?
We most certainly did build it ourselves. It was an idea I had months before the show. The day before the show I bought wood, burned and stained it, and built it with the help of my uncle. The day of set-up we loaded it up and hauled it to LA. 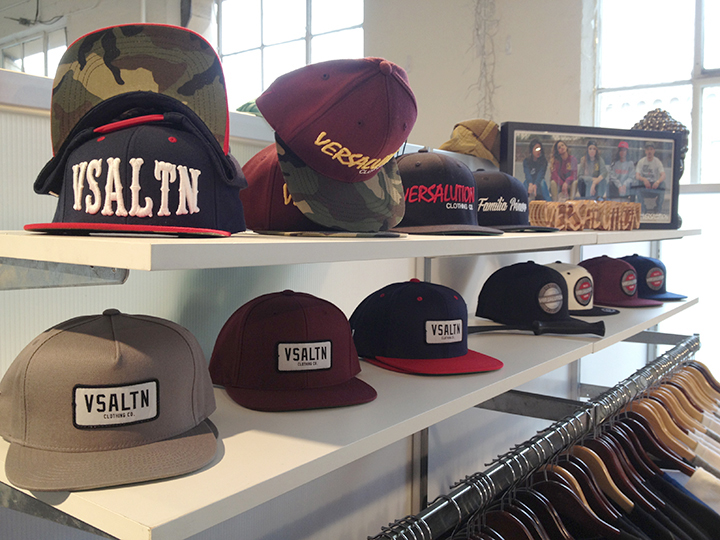 IS THERE A BRAND YOU LOOK UP TO, OR ARE CONTINUALLY INSPIRED BY?
There’s a shit ton of brands I’m inspired by, but if I had to name one, Acapulco Gold.

LASTLY, WHAT’S NEXT FOR VERSALUTION?
Take over the world. 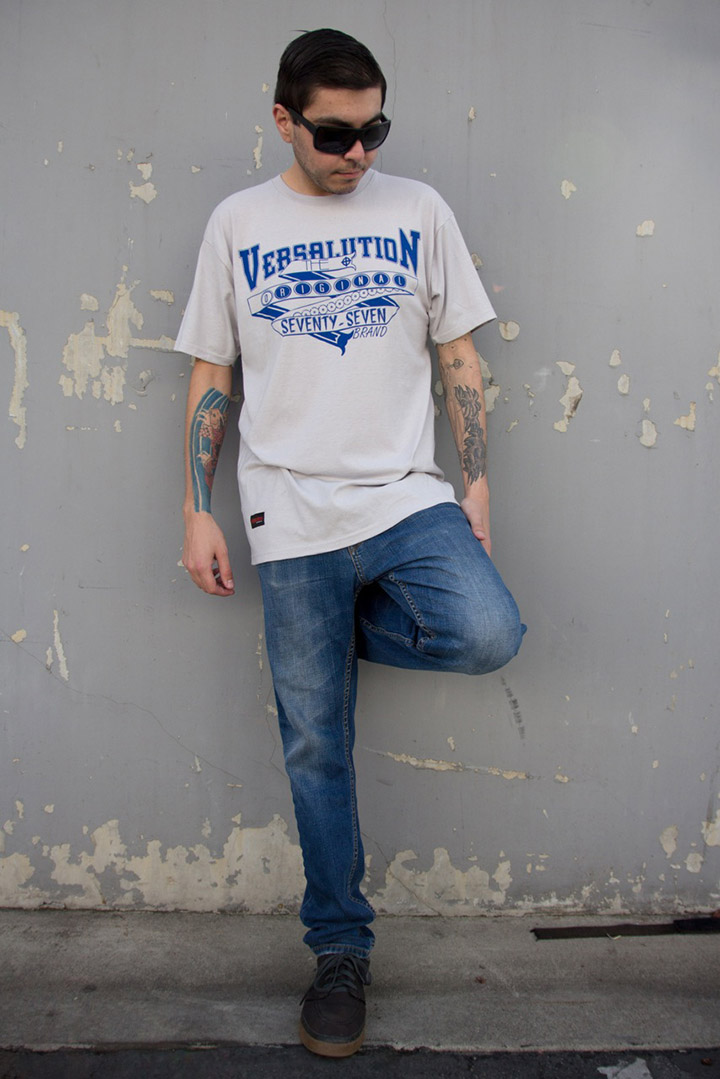 Big thanks to Eric for taking part in the feature. Stay tuned for lots more great shit coming from VERSALUTION, check them out and make sure to follow them on Twitter, Facebook, and Instagram for all their latest.